In This week’s adventure we traveled to the Lake Jackson Mounds located just outside of in Tallahassee, FL. This is the site of a Native American mound complex that was once a large village during the pre-Columbian time period. These mounds are earthen mounds used for ceremonial religious and political purposes. The culture surrounding these mounds are part of the “Southern Cult” or “Southeastern Ceremonial Complex” because there are many such mound sites found throughout the Southeast. Though the Lake Jackson Mounds are one of the larger sites. During its heyday, this mound complex would have been a regional center for local people to come trade goods as well as to partake in politics and religious ceremonies. The mounds were built during the period 1200 to 1500. Native people would continue to return to the area to pay homage to their ancestors and to the religious significance of the site.

The site was later used as a plantation and still today there is remnants of a grist mill. Today the site is preserved as a State Park. This is a total dog friendly park that is full of trails and adventures. There are mounds to explore and to learn all about the history of the site. For more information check out http://www.floridastateparks.org/lakejackson/

Check out that mound.

It’s a long way down those stairs.

Down the stairs the we go

Hiking along the trails.

A view of the mound.

We’re tired of the stairs its time to go home. 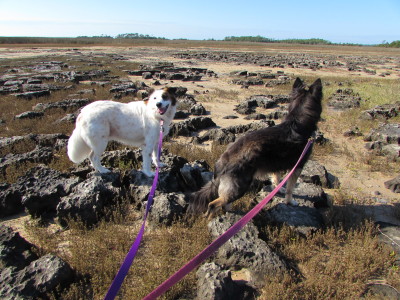